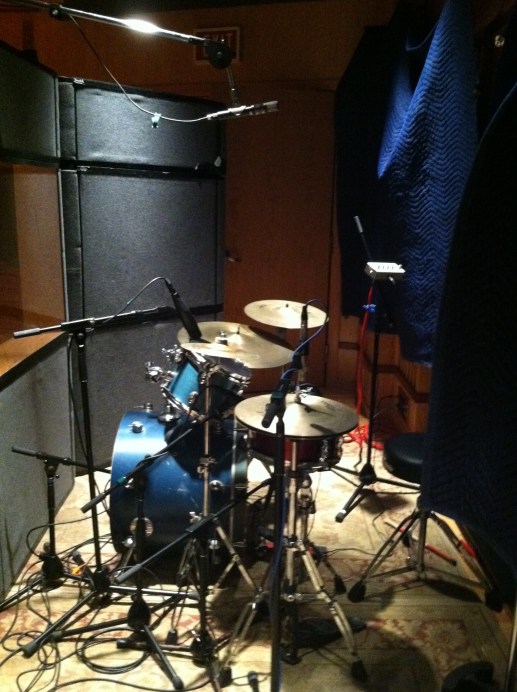 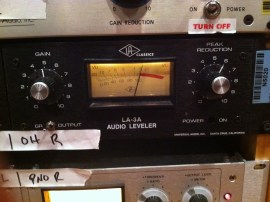 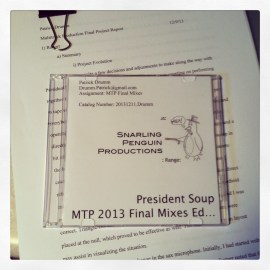 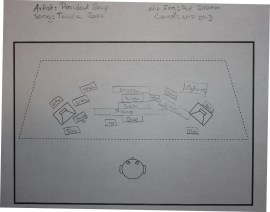 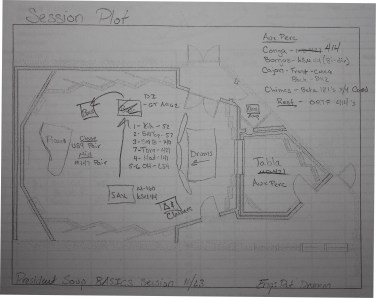 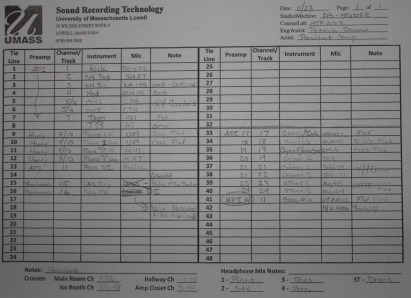 Pat Drumm recorded local Lowell band “President Soup” for his final project in MultiTrack Production . The following is an interview with Pat.

1) I can see from your floor plan layout that you decided to track drums, piano, bass, and sax all in the main live room of Studio 114. Can you tell us how you managed to avoid leakage while still giving the performers sight lines?

Well, playing all in the same space was the band’s idea. I was trying to isolate utilizing the rooms in 114 better, but since they fought hard to be in the same space I decided to meet the challenge and get creative. The biggest issue was going to be the piano microphones. My first line of defense against leakage would be the piano lid, so my thought naturally was to open the lid away from the drums. To address the room reflections that would leak into the piano, I decided to use the absorptive side of the room so that any sound waves traveling in that direction would be absorbed instead of reflected. The only instrument leaking into the piano was sax, and I was okay with that. Around the drummer was difficult to tame as well. I put him on the diffusive side of the room, with a gobo booth in front with the clear section in the middle for his sight lines. The drummer could see everybody except the auxiliary percussionist. I put blankets over all of the diffusive panels to absorb the reflections as best as I could so that the overhead microphones wouldn’t become too reflection heavy and create phase cancellations. This method proved to be quite effective. Bass was direct and the amp was in the closet giving me great isolation there.

2) Were the tabla and other auxiliary percussion tracked concurrently with the instruments in the main room or was that a separate overdub? Either way, why?

There is only one auxiliary percussionist and my initial thought was to have him and all of his instruments in the isolation booth with a stereo pair to cover most everything. The band didn’t quite want this, but instead decided to track triangle and chimes with the rest of the band, leaving tabla and conga to be some of the instruments to be overdubbed. So triangle and chimes were performed in the live room, while overdubbs of percussion were done in the iso booth. The choice of using the iso booth was actually a way to save time. While overdubs were being tracked, the live room could be broken down at the end of the night. This proved to work out great. Any overdubs of main instruments like sax, guitar, and keys, were done in the live room for simplicity, and were tracked simultaneously as well.

3) I can see from your input sheet that you bussed 4 piano microphones down to two tracks on the Studer. For those of us that are new to limited track counts, can you describe how this works on the console as well as what mistakes to avoid in this destructive process? Were there any other instruments that you summed before hitting tape?

As an effort to build good habits of selecting my sounds before rolling tape, as opposed to “fixing it in the mix” or deciding later, I wanted to commit to a sound. With piano, I had 2 stereo pairs of microphones to choose from, and I simply bussed them to the same pair of mix busses, with the pan function enabled. While listening to the input of the tape machine, I simply balanced the 4 channels to my liking and was sure to not overload the busses. I did this also with bass except it was a mix between the DI and the amplifier microphone. The key to this working is not being afraid of not liking the sound you are hearing and making decisions to change out microphones or reposition them. When you track everything right the first time, it makes your job as mix engineer that much easier. I will say that these piano tracks were difficult to mix in the end. The stereo imaging could have been handled better by myself.

4) Can you talk a little bit about how you set up the dynamic range of ‘Tabula Rasa’? Specifically how you planned out levels of such a long, sectional piece.

Tabula Rasa was extremely difficult to mix, however I had recently heard some great information in a mix engineer panel at the AES convention in NYC. I believe it was Tom Elmhirst (Adele, Amy Winehouse, Arcade Fire, Beck, The Black Keys, The Civil Wars and U2 to name a few) who said that when you have a song that builds and builds and builds to climax at the end, start mixing at the end and work your way to the beginning. I had a project back in my senior year where I struggled with this so I knew what I was up against. Once I got all my sounds going, EQ, compression, reverb, I was able to begin balancing my mix in the beginning of the piece. Then after my basic balance was all set, I could go to the end of the song and begin mixing there. I had to be good about labeling my take sheet on my tape with times so that I could find each part of the song quickly. I also had to set up tape on the side of most faders so that I could mark down the mix level changes. The band had a pretty dynamic performance though, so not many changes were needed. I just needed to leave headroom at the beginning for the song to be able to go somewhere. I mixed both songs in a 6 hour session which was pretty difficult. However, I thought my tracking was great so I didn’t need any EQ surgery.