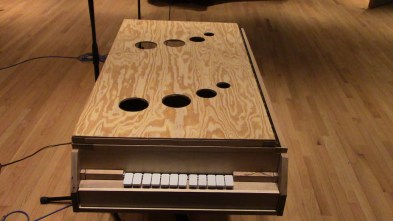 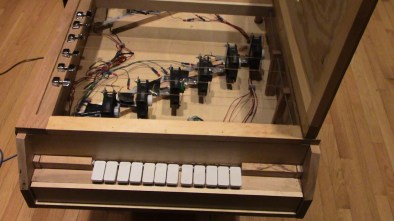 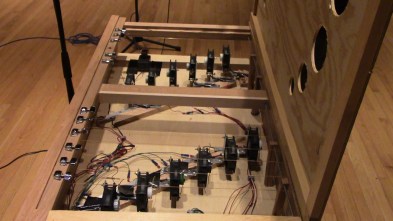 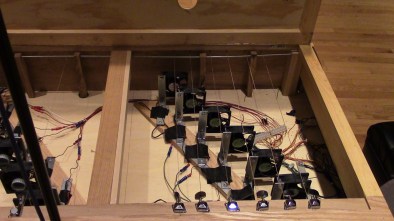 Dave Garcia invented the “Strombolium” for the Musical Instrument Project in Acoustics & Psychoacoustics (78.390).  The parameters of the project are listed here courtesy of Professor Duff Kirklewski. Take a listen!

The following is a video of Dave playing the instrument in Studio 114 .

Q&A with the creator:

How does the Strombolium produce sound?

It is powered by a 12 volt DC adapter that feeds twelve switches – these switches are off by default and, when pressed, complete one of twelve circuits that are each hooked up to their own respective DC fan. Each of these salvaged computer-coolant fans has a small piece of wire affixed to it so that, when powered, it acts like a weed-whacker striking its own respective string producing a tremolo effect.

What were your sound synthesis goals in building the Strombolium?

In a word – robotic sitar. The tremolo effect of the fan was the crux of my plan but the sound it wound up producing was much more wild than I had imagined – I figured it would sound like tremolo-picking a normal acoustic guitar but the fans hit so much faster and harder than any standard-issue human could, causing the upper partials to start screaming in a way that I’d never heard from a stringed instrument. The third harmonic becomes very prevalent when the fan reaches it’s maximum speed and sounds at times like a new note emerging and ringing out above the fundamental. Since the fans take a moment to get up to speed due to their low torque, the attack of each note is too long to play most melodies but this makes it a very interesting chordal instrument.

If you were going to build a Strombolium 2.0, what would you do differently?

Bigger. More strings over wider range and a bigger body – and wood varnish. I’m very pleased with how all the innards are holding up with the exception of the pieces of wire that strike the string. It was difficult to find something that was rigid enough to get a good tone but not so stiff that it would stop when it hit the string – I wound up using ordinary copper wire after rejecting many other candidates. I also had the crazy idea of adding metal pipes tuned in unison with a respective string that would be hit simultaneously buy the same fan mechanism but this proved unfeasible for Stombolium 1.0.

Audio and Video by Jonathan Corey (MM:SRT 2015) and Andrew Baptista (BM:SRT 2014).  The audio was recorded with an Earthworks OM-1 microphone through the Millennia HV-3d preamp in Studio 213.